Lasers are beams of light powerful enough to shine miles into the sky or cut through lumps of metal. We see them in everyday life in barcode readers or the special effects during music concerts. We also see them in films. In Star Wars, the First Order's Starkiller Base is equipped with lasers strong enough to blast an entire planet apart in seconds!

Astronomers have spotted laser beams shooting from the centre of the cosmic gas cloud seen in this space photograph. This picture shows the spectacular ‘Ant Nebula’. This planetary nebula was created when a star, similar to the Sun, reached the end of its life and cast off its outer layers of gas into space. Some say the colourful patterns resemble an ant — can you see it?

Normally, at the centre of these nebulae is a small, white star (called a White Dwarf) but very little else. But this one is crammed with 10,000 times more material than normal! The extra gas has formed into a spinning disc, and that is shooting out the powerful laser.

It’s like the unusual disc has been created by a hidden companion star to the white dwarf. The invisible companion star’s strong gravity has been stealing material from the nebula. As the gas is pulled onto the companion star, it forms a disc, similar to the way water swirls around the plughole before falling in.

Space lasers are a very rare sight, only a handful have been seen before, making what you might call a dazzling discovery!

The first man-made laser was created in 1960, an achievement which is still celebrated each year on 16 May as the International Day of Light. 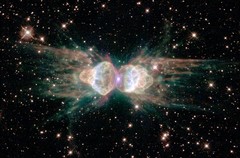