Everyone loves to collect their favourite things. For some people that’s action figures or stickers, others it could be stamps or shells, and some people want to catch all the Pokemon. Collecting is fun but it can also tell you more about things you are collecting. You might notice that all your stamps have something in common or your shells tell you something about the creature that lived in them.

A group of astronomers in Japan have collected pictures of 1,800 rare and explosive supernova events. To find such a large number of supernovae, astronomers captured images over a very wide area of the night sky. They continued to take images of this area of the sky for six months to look out for sudden bright bursts that gradually disappeared.

When a very large star is nearing the end of its life, its material is violently thrown into space. This explosion is very bright and can takes months to fade away. This is called a supernova.

Some supernova explosions remain bright for a long time, which is useful for astronomers who want to measure how the Universe is growing. To do this, researchers use these bright supernovae to calculate how far the star is from Earth.

When supernovae explode, they send matter into space at up to 40,000 kilometers per second! At that speed it would 10 seconds to get from the Earth to the Moon. (source) 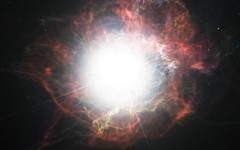