We typically eat breakfast cereal, fruit, eggs or toast in the morning. But even the largest objects in the Universe have to feed on something!

Black holes feed on gas and dust, and the earliest black holes in the Universe ate a lot of it!

Anything that gets too close to a black hole is pulled to it with such a strong force that it has no chance of escape. This material that gets pulled in is what makes a black hole grow bigger in size.

A team of astronomers have recently observed pools of cool gas around some of the earliest galaxies in the Universe. These are in fact the perfect food for supermassive black holes at the centre of these galaxies to help them grow.

This food storage might explain how the black holes grew so fast in the early stages of our Universe’s history.

The astronomers are looking deep into space, which means this black hole food is being observed as they were over 12.5 billion years ago.

The opposite of a black hole is called a white hole. Nothing – not even light – can enter a white hole, but stuff can escape from one! However, white holes probably don’t exist in the real Universe – it’s just one solution to a very difficult math problem! 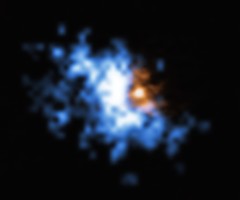