Imagine a giant dinner plate that could fit our entire solar system. Almost all of the planets would be touching the plate because our solar system is very flat.

But this is not always the case because some systems in the universe are tilted!

A Violent Series of Events

For a solar system to become tilted, something must have changed its shape. This can also happen long before planets form, when the system is still a large disc of gas and dust.

An international team of astronomers have found the first direct evidence that groups of stars are strong enough to tear apart their planet-forming discs. This creates a warped and tilted disc!

The team studied a system called GW Orionis, which is 1300 light years away in the constellation Orion. This system has three stars and a large deformed, broken-apart disc surrounding them.

A Home for Planets?

When a star is born, any leftover gas and dust forms a disc around it, similar to Saturn's rings. Within this disc, small dust grains made of rock or gas sometimes form. These grains can then collide and stick together, forming larger and larger objects. In these rings of dust and gas, called protoplanetary discs, is where planets are born.

No planets have formed in the peculiar tilted rings of GW Orionis... yet!

But, this new research suggests that planets may form in these tilted rings of gas and dust that encircle more than one star.

Astronomers believe that around half of all planets live in star systems with at least two stars! 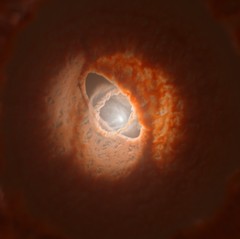