Home > News > Updates
Click to see full image
More news:
> Swiss High School Students Organise Educational Activities in Mayotte
> The sky is not the limit: 230 000 people reached by Space Awareness
> Applications for the ESA-Galileo Teachers Training Workshop Open
A Once in a Lifetime Event Leaves a Lasting Legacy in Timor-Leste

Last week was the final opportunity to see a transit of Venus in our lifetimes. However, for the population of Timor-Leste – a sovereign state on Timor Island in Southeast Asia, which gained independence only 10 years ago – it was also an opportunity to be introduced to astronomy for the first time, thanks to an EU Universe Awareness (EU-UNAWE) project.

On 6 June, about 3800 people in Timor-Leste attended a public observing event organised by the EU-UNAWE International Office in the country’s capital, Dili. “The celebration of the 2012 transit of Venus in Timor-Leste was a fabulous event, which has had an enormous impact on the population of Dili, especially with the young children,” says Ana Bessa, a local schoolteacher who helped the EU-UNAWE team to plan and implement their activities. A second observing event was also held in Atambua, Indonesia, in the west of Timor Island, which was organised by UNAWE Indonesia.

Pedro Russo, EU-UNAWE International Project Manager and a member of the team that visited Timor-Leste, learned that astronomy used to play an important role in the daily lives of the Timorese people. “Some of the elderly members of the population mentioned that their ancestors understood the sky better than they do today. They could tell when the rainy season was coming by the stars that were visible, which was important for agricultural work. Maybe it is not too late to collect this knowledge,” says Pedro. Today, the local population only have a basic understanding of astronomy. “Most knew that the Sun is a star, and some knew the names and the order of the planets, but not much else,” says Pedro.

The EU-UNAWE team opened an astronomy exhibition at the National University during its weeklong visit to Timor-Leste, featuring five panels in which two Timorese schoolchildren learn about astronomy. The exhibition attracted a lot of attention during the public observing event, with thousands of children quickly scribbling down as much information as they could. The exhibition will be displayed later this month in the city of Baucau during the Baucau Book Fair. Furthermore, EU-UNAWE will continue to work closely with the recently established reference schools across the country, which act as a hub for best practices and tools for other schools. The reference schools will receive a translated version of the EU-UNAWE teaching aid called Universe in a Box and training in how to use it.

When asked about the lessons learned for the trip, Pedro says it is crucial to have local contacts for each activity or event that is developed. “Ana Bessa, a maths teacher at the Portuguese school in Timor-Leste and Teresinha Soares, head of the Physics Department at National University, were vital to the success of our project,” he says.

Please visit our Google+ page for more photos from the trip to Timor-Leste. 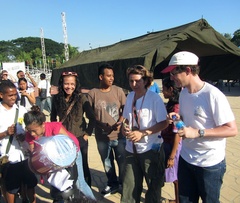 transit_venus
Transit of Venus in Timor-Leste