This week, UNAWE’s International Project Manager, Pedro Russo, has returned to Timor-Leste (also known as East Timor) as part of a five-day trip on the island in Southeast Asia, running various educational astronomy activities. Last year, UNAWE introduced astronomy for the first time, to the sovereign state which gained independence only one decade ago. The first visit coincided with the transit of Venus, around which UNAWE developed an educational project that turned into the largest scientific event ever organised in the nation with more than 3800 attending the public event.

During this visit UNAWE will be running several educational activities in Timor-Leste, from 11th to 15th November 2013. The programme includes a workshop for children and their families during the weekend and teacher training sessions utilising the Universe in a Box educational toolkit, and a short, pilot TEMI workshop. Pedro will also act as keynote speaker at the 10th anniversary of the National University of Timor-Lorosae.

Endorsed by UNESCO, UNAWE is now an integral part of the IAU Strategic Plan 2010–2020, which is called Astronomy for Development. It is through this framework, that we are implementing the Universe in a Box project in Timor-Leste, with the aim of sending one box to every school and providing necessary training for teachers to use the resource. While in Timor-Leste Pedro will attend meetings with European Union's Ambassador & Ministry of Education to kick-start this implementation, starting in December 2013.

This UNAWE project in Timor-Leste is supported by the LKBF (Leids Kerkhoven-Bosscha Fonds), the European Union, Leiden University and the Fundação orient who are funding these activities. 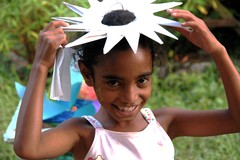