Stars come in different colours and sizes. This new picture shows the famous Red Giant star called Betelgeuse (you say the name as “Beetle-Juice”). The star looks small in the picture – just a little red circle at the centre. But Betelgeuse is actually huge: If you replaced the Sun in our Solar System with this star, it is so wide that it would reach as far as the planet Jupiter!

Betelgeuse used to be an average-sized star, just like the Sun. But as Betelgeuse got older, it grew in size until it was a Red Giant. The star is now so big that it has trouble keeping hold of its outer layers of material. This material has been blown away into space and formed a beautiful cloud of gas and dust, which is called a nebula. In the photo, the fuzzy red, blue, and purple cloud around the star is the nebula.

Since the nebula isn’t as bright as Betelgeuse, astronomers have to block some of the star’s light to be able to photograph it. This is why there is a black disk around the star – this is where astronomers blocked light from the bright star from entering the telescope so that they could photograph the nebula. The photo of the bright star was taken at a different time and astronomers then put the two pictures together.

The photo shows that the nebula isn’t evenly spread around Betelgeuse. This tells astronomers that the outer layers of the star left at different times and at different speeds. By studying this image, astronomers can learn a lot about how a star creates a nebula. 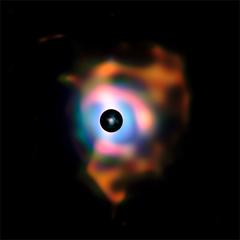