Did you know that everything on Earth is made of stuff from stars? If you could look at the world around you with a super-powerful microscope, you would see that everything is made up of tiny things called atoms. Today we know about more than 110 different types of atoms, with hydrogen being the most common atom in the Universe.

Some atoms, such as carbon, are made inside stars. But other atoms, such as gold, need even higher temperatures to form and are made when dying stars explode in what is called a supernova. When atoms stick together, the group of atoms is called a molecule. You will already know the names of some molecules, such as water.

Now, using a telescope called APEX, astronomers have found for the first time a molecule in space called ‘hydrogen peroxide’. This molecule was found inside a cloud of gas and dust in our galaxy (in the area marked by a red circle in the image above). Medical doctors use hydrogen peroxide to clean wounds, but this molecule can also help us in other ways.

Astronomers think most of the water molecules on Earth formed in space, but they don’t yet fully understand how. But hydrogen peroxide is made of the same types of atoms as those in water (oxygen and hydrogen atoms), so the discovery of this molecule could be the key to unlocking the mystery of water in space!

The temperature at the South Pole on Earth can drop as low as –60°C. But the cloud of dust and gas in which the hydrogen peroxide was found is insanely cold: –250 °C! 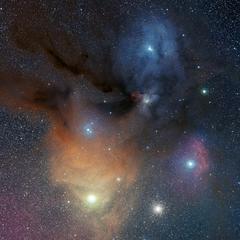 eso1123a
Astronomers Make a Splash with a New Discovery