What a beautiful picture of a field of stars from the European Southern Observatory! But wait a minute, it looks like someone has spilled something in the middle of the picture. At least, that's what the astronomer that first discovered this exact patch of sky thought. Although his exact words were a little more poetic: he described it as ‘a drop of ink on the luminous sky’.

What we're actually seeing in this picture is millions of glowing stars from the brightest part of our galaxy, the Milky Way. A patch of sky so filled with stars that hardly any dark spots are seen across the entire picture. However in the centre, next to an especially bright, blue star cluster, you can see a strange dark cloud.

It might look like an empty hole in the backdrop of stars, but this dark patch is actually a small, isolated cloud of dust sitting in front of the star field. We call clouds like this one ’Bok globules'. It is made up of small dust grains that are blocking the starlight from behind and making the region look empty.

Bok globules are the remains of much larger clouds, known as 'molecular clouds'. Or a more memorable name for them is 'stellar nurseries', because it is from these large clouds that stars are born! Around 10 million stars the size of our Sun can form from just one molecular cloud! The stars in the bright star cluster at the centre of this photo all formed from the same molecular cloud, and the Bok globule next to it is the little material that was left over.

Some psychologists make their patients take an 'ink blot test', to check the patients’ mental health. Depending on the shapes a patient sees in each ink blot, the psychologist determines their personality characteristics. What do you see in this dark patch? We see a lizard. What do you think that says about us! 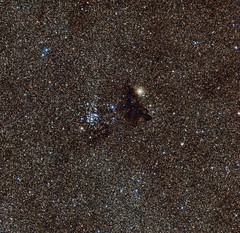