Today, a brand new telescope called ALMA opened its eyes. This gigantic telescope is the biggest in the world: it is made up of fifty-four 12-metre dish antennas (about the height of a four-storey building!) and twelve, slightly smaller antennas of 7 metres. These 66 dishes will all work together to create the most powerful telescope on the face of the Earth!

ALMA can capture light from some of the most distant objects in the cosmos, to show us never before seen details from the early Universe. This awesome picture shows the ALMA telescope sprawled across the Atacama Desert in Chile.

When the Universe was very young, it was filled with a thick fog of cold hydrogen gas. This makes it difficult to study with normal ‘visible light’ telescopes. But ALMA has special eyes that will view the cosmos in a different light known as 'radio light’. This will allow the telescope to pierce through the fog and reveal the secrets beyond for the first time.

ALMA will also shed light on some of the coldest objects in the Universe. It will peer through dark clouds of gas and dust that are just a few degrees above absolute zero — the coldest possible temperature (−273°C). Trying to get colder would be like trying to walk south from the South Pole! We hope to uncover exotic new planets orbiting alien suns and bright baby stars being formed inside the thick clouds.

If you want to be the first to know the secrets ALMA unveils about our cosmic origins, make sure to read Space Scoop in the coming months!

ALMA has been constructed 5000-metres high on a mountain in the Atacama Desert, Chile, one of the driest places on Earth! The immense height and dryness of the location means there's very little cloud cover to disrupt observations. But at 5000 metres, the air is extremely thin, so human access is kept to an absolute minimum!

This Space Scoop is based on Press Releases from ESO, NAOJ.

This Space Scoop is based on ESO and NAOJ Press Releases. 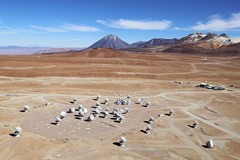 eso1312a
The Search for our Cosmic Origins Begins