Late one night, while observing a nearby galaxy, a team of professional astronomers got a surprise – a bright new object had appeared in the galaxy overnight! Upon closer inspection they realised they were watching the fiery death of a massive star, one of the most violent events in the Universe! These explosions are called 'supernovae'. If you look at this space photograph, you can see the new supernova around the bottom of the galaxy. Although it appears as a little dot, this supernova is actually shining as bright as five billion suns!

Like the stars they evolve from, there are different kinds of supernovae. This one is what astronomers call a 'Type Ib' (said as “one B”) supernova. This means that even before it exploded, this star had been on a cosmic crash diet. That is, extremely strong winds blew out of the stars and gradually pushed away a lot of the gas that lay close to its surface, before it finally detonated.

Every year astronomers see dozens of Type Ib supernovae in far away galaxies, but they’ve never managed to identify exactly which star exploded. Before they turn into bright supernovae, the distant stars are usually too faint to make out. However, with this supernova astronomers think that for the first time they've worked out which star created the super-bright object we see in this picture!

So, how did they finally manage this? Through a lot of hard work! They scoured hundreds of old photographs showing the region of space the supernova was found in, searching for a star in the exact location of the supernova. And they found one. Even better, it was a massive star that was famous for having super strong winds!

It's actually gravity that gives supernovae their energy. The core of the star “implodes”, meaning it collapses in on itself, sending out a powerful shockwave that causes the rest of the star to explode.

This Space Scoop is based on a Press Release from LCO. 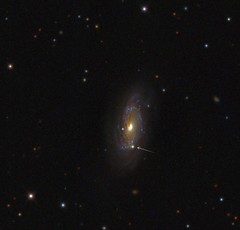 Type1b_supernova
Now You See Me, Now You Don’t