Asteroids are awkward to photograph. Can you imagine how hard it is to spot one of these tiny, dark lumps of rock against the blackness of our night sky? Plus, they don’t stay in one place. Like Earth, asteroids move around the Sun. And, as the Earth rotates, different asteroids become visible in the sky.

But astronomers don’t give up easily, and asteroids are something they really want to study.

Understanding what asteroids are made from will help us find out how our planet and Solar System were made. Studying them can even keep us safe — knowing where asteroids are and how they are moving means we'll know if one is on a crash-course with Earth!

The asteroid in this photograph is called Itokawa. It became famous in 2005 when a Japanese spacecraft called Hayabusa visited it and took some photographs – including this one! Thanks to Hayabusa, we know the exact (odd) shape of Itokawa and its size, which is just under twice the length of the Eiffel Tower. But what’s under the surface?

To answer this question astronomers’ eyes have been on Itokawa once again, using telescopes across the world. By very carefully watching how the asteroid spins around and using exact measurements of its weird shape, astronomers have been able to peer under the surface into Itokawa’s rocky heart. And what they found was very strange indeed.

Inside, the asteroid seems to be made of two very different pieces of rock that have somehow merged together. This means that Itokawa was probably formed when two asteroids crashed and stuck together!

Hayabusa’s mission to Itokawa was actually a bit of a disaster. The spacecraft was supposed to collect samples of material from the asteroid, but it wasn’t working properly. Luckily, the spacecraft accidentally bumped into the asteroid and happened to scrape off some rock to bring home! 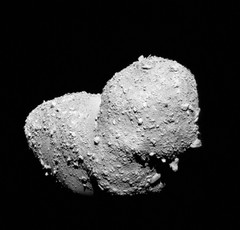 eso1405b
The Asteroid with a Heart of Stone