What is this illustration showing? I’ll give you a clue – it’s not a picture of the Sun.

Most people will tell you the Sun is yellow, but if you could fly out into space and look at our star without going blind, you’d actually see that it looks white. This is because sunlight includes all colours of the rainbow. When they’re all mixed together, these colours appear as white. Our Sun appears yellow to us because of the Earth’s atmosphere (the gases that surround our planet).

Blue light bounces off particles in Earth’s atmosphere, like dust and water, and is scattered away in all directions before reaching our eyes. Red light is less easy to scatter and can travel through the atmosphere to our eyes. This results in the sunlight looking redder than it actually is.

However, there are yellow stars out there (and blue stars, too!) This picture is an artist’s illustration of one of the most rare and awesome stars in the Universe – a yellow hyper-giant. You can also see a smaller companion star on the right.

There are only a dozen or so yellow hyper-giants known in our galaxy. For astronomers finding one of these gigantic stars is like catching Harry Potter’s golden snitch. And this one is the largest ever seen. If this star were the size of the London Eye, using the same scale, our Sun would be the size of an orange!

But the star hasn’t always been as large as it looks today; over the last 40 years it has been rapidly expanding.

Years ago, the star was burning hydrogen fuel – like our Sun does now – and it was much smaller. But then it ran out of this fuel, which made it swell into a huge red star (called a super-giant), before losing its outer layer, becoming a much brighter yellow hyper-giant.

Today, this star shines a million times brighter than our Sun and despite its huge distance from Earth, this yellow hyper-giant can just about be seen with the naked eye!

This yellow hyper-giant is the 12th largest star to be found in the entire Universe! 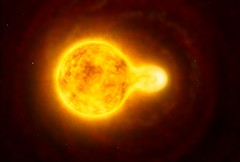