Many of you will recognise the object in this space photograph as a galaxy: a collection of billions of bright, shining stars, and cosmic gas and dust.

In this day and age, almost everyone has seen a photograph of a galaxy, making it hard to believe that less than 100 years ago most of the world’s top astronomers didn’t believe they existed!

One of the most important events in astronomy was The Great Debate between Harlow Shapley and Heber Curtis in 1920. Before then, the existence of galaxies was uncertain. Most people believe that galaxies were simply ‘spiral nebulae’ within our Galaxy.

This was the argument that Shapley was supporting during The Great Debate. He also calculated that the Milky Way was 300,000 light years across, which is three times larger than its true size as we know it today. Yet he said the Milky Way was the whole Universe!

Opposing him was Curtis, who believed that the spiral nebulae were actually separate galaxies or “island universes” as they were sometimes known. And that the Universe is much, much bigger than everyone believed.

Today we know that Curtis was correct about the spiral nebulae being separate galaxies. The Milky Way is just one of hundreds of billions of galaxies in the known Universe! In today’s picture you can see one of our closest neighbour galaxies, the Triangulum Galaxy. 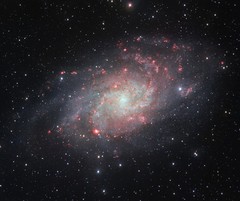 eso1424a
Are We Living in an Island Universe?