In 1670, some of the greatest astronomers of the time were stargazing. While staring up at the dark night sky from their homes all over the world, they were startled to witness a bright point of light appear in the sky where there had been none before! After studying the new star, they decided it was a nova (which just means “something new in the sky”) and they named it ‘Nova Vul’.

A nova is powerful explosion on a star that causes it to instantly become much brighter. You can see the remains of Nova Vul in this space photograph!

You might be wondering: what is the difference between a nova and a supernova? Well, a nova happens when a white dwarf and another star live in the same system, orbiting around each other.

The greedy white dwarf sneaks material from it’s partner and eventually it takes so much material that it can no longer hold itself together. When this happens it suddenly explodes as a nova, shooting hot gas into space. But, unlike a supernova when the entire star is ripped apart, with a nova the star survives the explosion.

Now, 300 years after the appearance of Nova Vul, astronomers have a new clue about this cosmic mystery. It turns out this ancient light wasn’t a nova at all!

Instead, astronomers can now reveal that it was something much rarer and more brilliant – a spectacular collision between two stars! The stellar crash was so violent that it caused one star to explode and material from inside both stars was spewed out into space.

A supernova normally shoots off enough material to make an entire Sun, which is 10,000 times more than a nova! 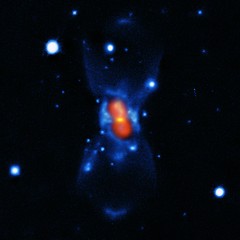 eso1511b
Something New in the Sky!

eso1511b
Something New in the Sky!