Do you know the story of the phoenix? The phoenix is a mythical golden bird that lives for hundreds of years. When it grows old and frail, it bursts into flames and is reborn from the ashes to begin the cycle again.

It’s not often that fairy tales come to life, particularly not tales as dramatic as that of the phoenix. But the Universe holds many wonders and astronomers have just witnessed a long-dead region of space "coming back to life". Much like the mythical phoenix!

This real-life fairy tale begins billions of years ago, when a distant supermassive black hole burst violently into life. It began to blast out enormous jets of high-energy particles. The jets were so powerful that their particles spread out over hundreds of thousands of light years, creating a bright shining cloud.

For many millions of years the cloud shone proudly and brightly across space, not in the light we see with our eyes, but in radio light. Until eventually the cloud ran out of energy and faded into darkness again.

…But the story doesn’t end there.

Many years later another violent event occurred near this giant cloud when two clusters of galaxies crashed into each other.

The collision sent out a shock wave so powerful that it acted on the cloud like someone squeezing a bottle of fizzy pop. But instead of causing pop to shoot from the cloud, the additional energy caused the cloud to once again shine. The radio phoenix has been reborn.

A portrait of this reignited radio phoenix can be seen above. The shining cloud is the green squiggle just below the centre of the picture.

Many astronomical objects emit radio waves, but this wasn't discovered until 1932! 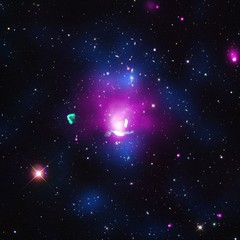 a1033
Rise of the Radio Phoenix