There is no such thing as a stupid question. Some of the simplest questions have the most interesting answers. For example: why is space black? To answer this question, we have to look at the distances between stars, the speed that light travels and how the Universe is growing bigger all the time.

Astronomers using the ALMA telescopes have been trying to answer their own simple question: why are more stars being born in some galaxies than others? At a first glance the answer seems obvious – bigger galaxies have more cosmic gas, so more stars will be born in them than small ones. After all, cosmic gas is the main ingredient needed to make stars.

While this is true most of the time, it is not a concrete rule. Scientists using the ALMA telescope have just discovered that even with the same amount of star-making material, galaxies in the distant past churned out a much higher number of stars. Billions of years ago, galaxies were more simply more productive.

The galaxy in which we live (called the Milky Way) normally makes one new star per year. In the past, some galaxies could create a few hundred stars every year!

Astronomers still don’t know why these early galaxies were more productive, but they think its related to cosmic collisions. Galaxies were much more likely to crash into one another in the past (there was less space and galaxies were bigger), which might have had the knock-on effect of more stars being born.

The first galaxies began to form over 13 billion years ago! That’s not long after the Big Bang! 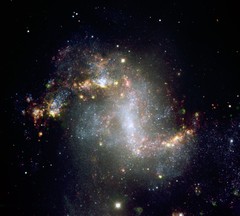