In their teens, children grow rapidly to reach their adult heights. And it turns out that baby stars go through the same thing!

A massive young star was observed in 2008, and then again in 2015 and 2016. By comparing the older pictures of the baby star with new photographs, astronomers discovered that it has experienced a huge growth spurt over the past few years.

Like all very young stars this one is wrapped in a cocoon of gas and dust, so it can’t be seen directly. Instead scientists looked at the cocoon and were surprised to find it had grown four times as bright during that time. This means the star inside must be 100 times brighter than it was previously, to have lit up the cocoon so much.

How did such extreme growth happen in such a short time?

Scientists think a large clump of gas must have fallen towards the baby star, like water falling down a plug hole. It formed a flat, rotating disc around the star. When enough material piles up in a disc like this, it suddenly crashes onto the star’s surface, like an avalanche.

Who knows, the star may experience another growth spurt within the next few years. It’s lucky that stars don’t need to wear shoes or trousers!

This star is one of many located in the Cat’s Paw Nebula. On photographs of the night sky, this star-forming region looks like a footprint of a cat – hence the funny name. 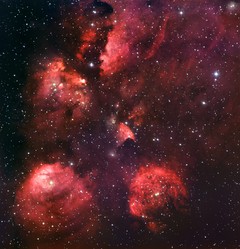