A group of scientists have found 20 new moons orbiting Saturn.

Saturn is the sixth planet from the Sun and is famous for its bright rings made out of ice and rock. It is now also known for having the most moons of any planet in our solar system!

A moon is a natural satellite that orbits a planet. Most of the planets in our Solar System have at least one moon, like Earth, some planets have dozens.

These newly discovered moons that orbit Saturn are not very big. Each of them measures 3 to 5 kilometers in diameter - roughly the same length as the Hollywood Walk of Fame.

What’s even more peculiar is that 17 of them orbit Saturn backwards, which means that their movement is opposite of Saturn’s rotation. This was likely caused by a violent collusion in the planet’s distant past that pushed these moons to orbit in this direction.

If you could find a body of water big enough, Saturn would float! This is because the planet is mostly made of gas, while Earth is made mostly of rock. 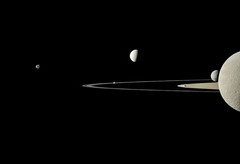