Chairs and coordinators of committees from parliaments of Europe, South Africa and the Netherlands spoke during the opening of a workshop on “Astronomy to Inspire and Educate Young Children” at Leiden University in the Netherlands. The workshop brings together experts in astronomy education, teachers, astronomers, politicians, artists, diplomats and members of the EU Universe Awareness global network.

Participants from 28 countries around the world gathered at the Lorentz Center of Leiden University for a weeklong programme of talks and discussions that cover all areas of astronomy education. The focus of the seminars will be on early child development. EU Universe Awareness (EU-UNAWE) targets children aged 4-10 years, particularly those from disadvantaged communities. EU-UNAWE aims to inspire young children with the exciting Universe, thereby introducing them to the fun of science and engineering and helping to broaden their minds. Topics to be covered will include curricula, educational materials, methods of evaluation and global capacity building.

During the opening ceremony Gay Mitchell, Coordinator for European People's Party members of the Development Committee of the European Parliament spoke about the importance of astronomy and EU-UNAWE for global capacity building. This was followed by a talk on science education in South Africa by Eugene Ngcobo, Chair of the Science and Technology Committee of the South African Parliament. Bas Jan van Bochove, Chair of the Netherlands Parliamentary Committee for Education, Culture and Science then discussed EU-UNAWE and its contribution to the education of disadvantaged communities in the Netherlands.

“I’m delighted to welcome so many influential and inspiring individuals to Leiden for the first EU-UNAWE workshop. I’m confident that the event will further strengthen Universe Awareness activities around the world,” says George Miley, Founder of Universe Awareness (UNAWE) [1].

During the official opening George Miley was honoured with a knighthood in the Order of the Netherlands Lion (Ridder in de Orde van de Nederlandse Leeuw). The honour was awarded by the Mayor of Leiden, Henri Lenferink, on behalf of Queen Beatrix, in recognition of George's outstanding academic career and his efforts to promote using astronomy for global capacity building [2].

The EU-UNAWE International Workshop is being dedicated to the late Franco Pacini, National Coordinator of EU-UNAWE for Italy, who died earlier this year[3].

[1] Universe Awareness (UNAWE) was initiated by IAU Vice President George Miley in 2005, with support from the Royal Netherlands Academy and the Netherlands Ministry of Education, Culture and Science. In February 2011, the European Union’s Seventh Framework Programme granted 1.9 million euros to further develop UNAWE programme in six countries: Germany, Italy, the Netherlands, South Africa, Spain and the United Kingdom. UNAWE projects that are funded by the EU grant are branded as EU Universe Awareness.

[2] More information about the Order of the Netherlands Lion: http://www.lintjes.nl/_en/civiele_orden/orde_nederlandse_leeuw/index.html

[3] Celebrating the Life and Achievements of Franco Pacini: http://www.eu-unawe.org/updates/unawe-update-1211/

Registration for the workshop has already closed, but footage of the workshop’s seminars will be streamed on the EU-UNAWE website (www.eu-unawe.org) in order to reach a wider audience. Remote participants are invited to contribute to the talks and discussions by tweeting with the hashtag #UNAWE. Media are invited to attend the EU-UNAWE International Workshop. 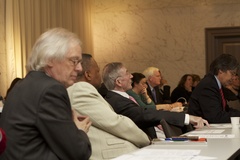