Kickstart the Universe: UNAWE crowdfund to send astronomy educational resources around the globe

Leiden University’s Universe Awareness educational programme has launched an innovative Kickstarter crowdfunding campaign this week at the 13th International Conference on Public Communication of Science and Technology (PCST 2014) in Brazil. The campaign will support the efforts of Universe Awareness to share the educational toolkit, Universe in a Box, with underprivileged communities around the world.

The Universe in a Box is an educational kit designed to assist teachers and educators in bringing astronomy and space sciences to 4–10 year old children around the world. Universe in a Box was developed to meet a demand for practical, interactive, and fun resources to bring astronomy to the classroom. Pedro Russo, Universe Awareness International Project Manager explains: “The idea behind Universe Awareness is to use the beauty and grandeur of the Universe to encourage young children to have an interest in science and technology and foster their sense of global citizenship from the earliest age. The Universe in a Box is the materialisation of this idea.”

Universe in a Box provides teachers and educators with over 40 practical activities as well as the materials and models required to do them. The funds raised by the campaign will be used to distribute an educational toolkit, Universe in a Box, to underprivileged communities and train primary school teachers to use it.  The Kickstarter campaign runs from 9 May until 10 June and aims to raise €15,000. It is one of the first Kickstarter campaigns in the Netherlands, where the crowdfunding platform was launched last week. For more information about the campaign and to contribute, please vist the Universe in a Box Kickstarter Campaign page:

Universe Awareness (UNAWE) uses astronomy to educate and inspire young children, particularly those from underprivileged backgrounds. It produces educational astronomy materials, gives teacher trainings, organises children activities and fosters a large global network. Over the last three years, UNAWE reached over 200,000 children and 5,000 teachers in 57 countries. Founded in 2006 by Leiden University professor George Miley, UNAWE went on to become a Cornerstone project of the successful UN-ratified IAU/UNESCO International Year of Astronomy in 2009 (IYA2009). In 2011 the European Union awarded a grant of 1.9 million euros to fund a 3-year project called European Universe Awareness (EU-UNAWE), which builds on the work of Universe Awareness (UNAWE). With this grant, EU-UNAWE was implemented in six selected countries: the Netherlands, Germany, Spain, Italy, the United Kingdom and South Africa. The Universe in a Box prototype was developed under  this programme.

UNAWE is endorsed by three Nobel prize winners,  UNESCO and the International Astronomical Union (IAU) and it is now an integral part of the IAU Strategic Plan 2010–2020, which is called Astronomy for the Developing World. This is an ambitious blueprint that aims to use astronomy to foster education and provide skills and competencies in science and technology throughout the world, particularly in developing countries.

UNAWE Universe in a Box Lead 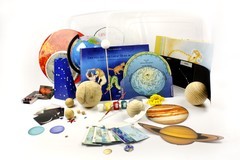 Universe_In_A_Box_contents
Universe in a Box Contents