The European Union has granted 2 million euros for EU Space Awareness (EUSPACE-AWE) a project that will use the excitement of space to attract young people into science and technology and stimulate European and global citizenship. The project will show children and teenagers the opportunities offered by space science and engineering and inspire primary-school children when their curiosity is high and their value systems are being formed.

EUSPACE-AWE, a 3-year project, will start in March 2015 with 10 partner organisations and 15 network nodes in 17 European countries and South Africa. The project will be led by a team from Leiden Observatory in the Netherlands, coordinated and managed by Prof. George Miley, Dr. Jarle Brinchmann and Pedro Russo.

It was one of only two projects to be selected for funding from 16 submitted proposals and received a grade of 14.5 out of a maximum of 15. EUSPACE-AWE is the first project to be awarded to Leiden University under the new Horizon 2020 programme of the European Union.

Activities will include teacher training, the development and distribution of educational resources as well as high-impact event for teachers and policy-makers at the European Parliament. EUSPACE-AWE will exploit extensive European networks of schools and science museums to reach teachers, schools and the general public and will work closely with the European Space Agency.

Particular attention will be paid to stimulating interest amongst girls and ethnic minorities and reaching children in underprivileged communities, where most talent is wasted. A special EUSPACE-AWE toolkit showcasing the history and accomplishments of Islamic science and technology will target children from the Turkish and North African migrant communities.

EUSPACE-AWE will build on Universe Awareness (UNAWE), an innovative project supported by the Netherlands Research School For Astronomy (NOVA) and Leiden Observatory that uses inspirational aspects of astronomy to introduce young children around the world to science and stimulate their sense of world citizenship and respect. UNAWE received 2 Million euros from the European Union between 2011 and 2013. Funds for EUSPACE-AWE were provided by the European Commission’s Enterprise and Industry Directorate.

Leiden University Professor George Miley, initiator and International Coordinator of both UNAWE and EUSPACE-AWE was delighted by the news: “EUSPACE-AWE will address two extremely important societal challenges – the need to stimulate more young people to choose careers in science and technology and the need to further a sense of respect and tolerance between different ethnic groups.”

According to Pedro Russo, International Project Manager of both projects: “Astronomy and space sciences are inspirational high-tech disciplines that can excite and motivate young people and give them a sense of perspective. With a combination of social, educational and scientific goals, UNAWE and EUSPACE-AWE play a unique role in education at all levels.” 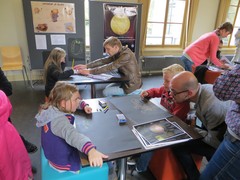