When the Sun starts to shine after it has rained, you can see a beautiful rainbow in the sky. This is because water droplets remain in the air after the rainfall and cause sunlight to spread out into all of the colours of the rainbow. Its secret wide range of colours is revealed.

But light has many more secrets. For example, did you know that the light that we can see with our eyes is only one of many types of light? You will probably be familiar with many of these other types, but you mightn’t have known that they are light, such as radio waves and microwave radiation. This is because when people are talking specifically about the type that we can see with our eyes, they usually only call it “light” when they should actually say “visible light”.

While our eyes can only see visible light, special cameras can detect the other types. Things look very different when you photograph them in a different type of light. For example, take this new picture of a galaxy called Centaurus A. It was created by combining photos of the galaxy that were taken with telescopes that can detect radio and infrared light. Now, look at this previous Space Scoop from two weeks ago of the same galaxy, which was taken in visible light.

Both pictures show the same galaxy, but they look remarkably different. While the picture that shows the galaxy in visible light is prettier, both photos give astronomers valuable information. It is only by observing all of the different types of light that they can fully understand what is going on in the Universe.

Only about 4% of the stuff in the Universe give off any type of light at all! 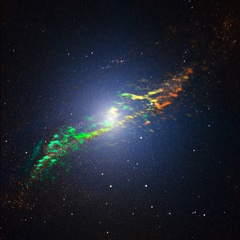