'Goldilocks and the Three Bears' is the tale of a picky little girl. Goldilocks doesn't like her porridge too sweet, like baby bear, or too salty, like daddy bear. She doesn't like her beds too soft or too hard. She likes things in the middle, like mummy bear: just right.

For this reason, we call the area around a star where the temperature is ‘just right’ for water to exist, the ‘Goldilocks Zone’. These zones are not too cold, so that the water freezes, and not too hot, so that it boils away. These are just the right conditions for life to exist, too! Take a look at image 2; the blue stripe shows where the Goldilocks Zone lies in our Solar System. For hotter stars, the habitable zone lies further from the star, and for cooler stars, it is closer.

Now, astronomers have discovered a record-breaking planet system in the neighbourhood of our Sun. A nearby star called 'Gliese 667C' has at least six planets orbiting around it. Of these, three are sitting snugly in the Goldilocks Zone! Never before have there been this many planets where liquid water can exist orbiting the same star. If we can find this many ‘Goldilocks’ planets around every star, then the number of possibly life-bearing planets in our galaxy is much larger than we thought. And so is the possibility of finding alien life!

Three really is the magic number for Gliese 667C. Not only does it have three ‘Goldilocks’ planets orbiting it, but it is also part of a three-star system! If there is any life on one of its planets, the other two stars would appear in its sky similar to the full moon in ours – you can see them illustrated in this picture! 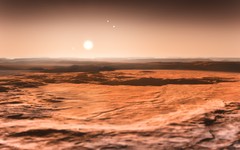 eso1328a
Goldilocks and the Three Planets