The hottest stars in the Universe, and some of the biggest, are called Wolf-Rayet stars (pronounced Wolf Ray-ay). Like the Big Bad Wolf of fairy tales, these stars huff and puff, and blow out powerful gusts of steaming hot gas.

When two Wolf-Rayet stars get together, their combined wind is enough to blows up powerful superstorms. These are thousands of times stronger than anything seen on Earth, and cause gigantic dust clouds to form, too.

Dust clouds in space are pretty common, but the spiralling pinwheel-shape of one in this picture is like nothing we’ve seen before. It was created by two Wolf-Rayet stars orbiting around each other.

As they dance around each other, one of the stars is moving much faster than then other. In fact, it’s moving so fast it’s nearly ripping apart! This is interesting because Wolf-Rayet stars are in the final part of their lives, well on their way to exploding as violent supernovae.

If a star’s rotating fast enough when it explodes, its fiery death becomes the most energetic explosion in the Universe: a Gamma-Ray Burst.

Gamma-Ray Bursts are blasts of energy that shine brighter than anything else in the Universe. If one were to take place anywhere near Earth, the energy would fry our planet in an instant.

Luckily, all the Gamma-Ray Bursts we’ve spotted so far were in distant galaxies, they are easily bright enough to be seen on Earth. However, there’s a chance that this fast-rotating Wolf-Rayet star may end up creating the first Gamma-Ray Burst in our galaxy!

Within the swirling clouds around these two Wolf-Rayet stars, winds are blasting at speeds of 12 million kilometres per hour. That’s 40,000 times faster than the strongest hurricane winds recorded on Earth!

This Space Scoop is based on Press Releases from ESO, ASTRON. 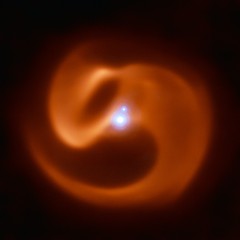