To celebrate the transit of Venus 2012 on 6 June 2012, Universe Awareness (UNAWE) is developing an educational project in Timor-Leste (also known as East Timor) in South-East Asia, which is one of the few countries where the transit event will be visible in its entirety. This project will be the largest scientific event ever organised in Timor-Leste and this will be the first time astronomy comes to the country since they declared their independence 10 years ago.

UNAWE will be running several educational activities in Timor-Leste, from 1 June to 8 June 2012. The programme will include educational play activities for children, teacher training sessions, public talks, university lectures, an exhibition about astronomy and a large-scale public observing event. It is expected that these activities will reach over 5,000 people in the capital city of Díli, and a further 800 schoolchildren in the city of Gleno.

“An event like the Transit of Venus creates an outstanding opportunity to bring astronomy and science to the Timorese population,” says Pedro Russo, UNAWE International Project Manager.  “We hope that our efforts will open new horizons for the young children of Timor-Leste and encourage them to pursue scientific and technological careers.”

On 6 June 2012, the planet Venus will travel across the Sun, as viewed from Earth. This is called a transit of Venus. It is among the rarest of predictable astronomical phenomena and this alignment will not present itself again until the year 2117. While transits of Venus are not as spectacular to observe as solar eclipses, they are historically important for determining the distance to Venus, and hence the size of the Solar System.

Universe Awareness was initiated by IAU Vice President George Miley in 2005 with support from the Royal Netherlands Academy and the Netherlands Ministry of Education, Culture and Science. It was selected as a Cornerstone project of the successful UN-ratified IAU/UNESCO International Year of Astronomy in 2009 (IYA2009). During IYA2009, thousands of UNAWE activities were organised in more than 40 countries reaching hundreds of thousands of children.  UNAWE is an important component of the IAU Strategic Plan 2010 – 2020 “Astronomy for the Developing World” in which astronomy is used as a tool for global capacity building at all levels of society - primary, secondary and university education, research and public outreach. The plan builds from the successful UN-endorsed International Year of Astronomy 2009. 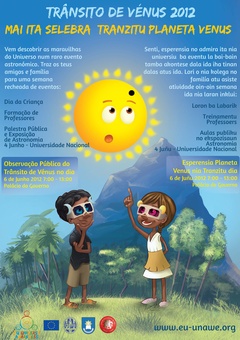 unawe_v2012t_poster
The UNAWE Transit of Venus 2012 in Timor-Leste Poster