Leiden Observatory is hosting the Astronomy, Radio Sources and Society, The Wonderful Century symposium on 10-13 June 2013. The event will bring together some of today's top research astronomers, science, policy makers, science communicators and educators and members of the media to discuss several topics on astronomy, radio sources and society and celebrate Professor George Miley’s achievements in the different domains of astronomy.

In June 2013 Leidse Schouwburg (Leiden theatre) in the Netherlands will host the Astronomy, Radio Sources and Society, The Wonderful Century symposium. The 4-day event provides an opportunity to celebrate Prof. George Miley's contributions to astronomy throughout his 50-year career: From his discovery of the most distant object in the Universe and his proposal for the new radio telescope, LOFAR, to his directorship of Leiden Observatory in times of changes and his international educational programme designed to inspire children with astronomy, Universe Awareness (UNAWE). The Symposium will be split into four sections, covering the vital relations between astronomy, radio sources and society.

The first day is themed "Astronomy and Society" and will cover topics ranging from the successes of big astronomy projects across the world and the lessons learned from them, to the role of astronomy in stimulating social and economical growth. This session will include contributions from Sir Martin Rees, Prof. Bernie Fanaroff, Prof. Ron Ekers, Dr. Peter Tindemans and many others.

The evening of the first day (Astronomy for a better world) will be for a more general audience and focus on the theme how Astronomy can be used as a unique tool to help stimulate global development. It will feature a live astronomical-themed musical performance.

The final 3 days of the symposium will deal with the importance of exploding radio galaxies in astronomy and their use as probes of the evolution of the Universe. This will feature new results with the Dutch/ European radio telescope LOFAR and potential for advances with next generation astronomical facilities.

During the symposium, Universe Awareness will be organising a EU-UNAWE Teacher Training Workshop for nursery and primary school educators in the afternoon of 11 June, at Museum Boerhaave in Leiden.

Media members (including active bloggers and other social media professionals) are welcome to attend all parts of the event. For media accreditation, requests for interviews and more information please contact Pedro Russo (russo@strw.leidenuniv.nl, +31 71 527 8419). 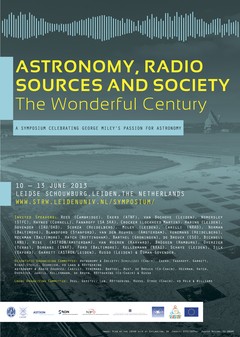