Beyond the vast stretch of empty black space making up our night sky, lie objects that are more exotic, more gigantic and more powerful than you anything we could imagine on Earth — merging galaxies.

Despite the huge distances between objects in space, it's fairly common for two galaxies to collide and merge together. They pull and twist each other as they slowly drift closer, totally changing the shape of both galaxies. The merging process can also trigger the frantic birthof thousands of massive stars and most exciting of all, it can begin a feeding frenzy for the monsters at the heart of the galaxies – supermassive black holes!

Black holes have such strong gravity that even light cannot escape their clutches. Black holes at the centre of galaxies are much bigger than ones out in the rest of space, so we call them “supermassive black holes”.

When they “feed on” (draw in) nearby gas and dust, they evolve into the brightest, and most powerful objects in the Universe. But, is this what fuels the engine of supermassive black holes? A team of Japanese astronomers has been attempting to find out.

Looking at a sample of 29 merging galaxies, the astronomers revealed that each one hosted at least one black hole that was actively gobbling up nearby material. 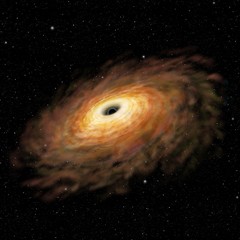 galaxy_merger
How to Feed Your Galactic Monster